by Mr LlamaDecember 19, 20190 Comments
My anniversary with Mrs Llama falls in December every year. Like every couple,  you would start scrambling for ideas on where and how to celebrate.

This year, I thought of spending time with Mrs Llama. To kill a few other birds with one stone, I also suggested having our x'mas celebratory meal in JB. Original idea was to try omakase at Kisho Sushi JB at Taman Pelangi (near to KSL mall). It would cost about 300-400rm per pax.

This is our itinerary:

This is our second time at this place. It serves awesome food at reasonable prices. It is quiet and provides free WIFI. Our favorites are the Peanut butter toast and the Spicy Chicken Rice which they call 辣椒呛鸡. The Yuanyang drink is awesome too.

The Peanut butter toast is crispy fried with egg, with the yuan-yang drink and lemon tea: 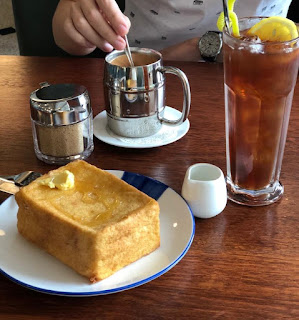 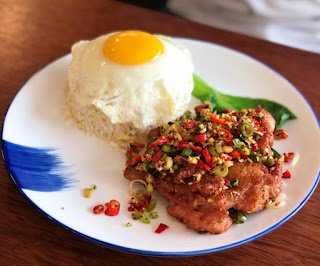 We had a bowl of Assam laksa and Ipoh curry noodles (if i recall the name correctly). Both was tasty, and it cost about 10-11rm per bowl, more on the pricey side. 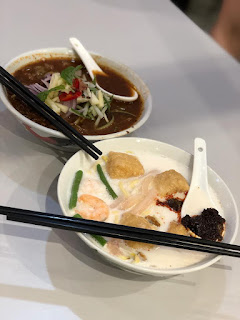 Deserts at Gindaco & Tai-Croissant Taiyaki
The Takoyaki was tasty, crispy on the outside, soft on the inside. However, it is still not as tasty as the ones I had in Tokyo. The Croissant was tasty, and we had no problems finishing it. We got quite filled and had to walk around to digest the food. 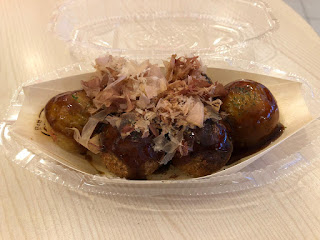 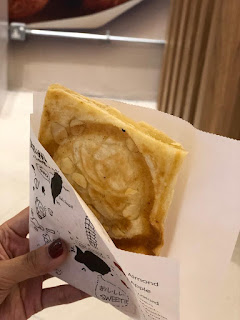 Shopping at Aeon Tebrau mall
The department store had a wide variety of stuffs and is better compared to other malls in JB. We shop for a while and headed back to Airbnb for rest.

Day 2
This is the day we are looking for - our xmas meal! (Yes, this is the meal for x'mas, but not our anniversary. Anniversary falls on x'mas eve, but this only counts for x'mas though)

We had originally wanted to try Kisho sushi as mentioned, but tadah! Here we are, at Sushi Zento. The picture below shows the outside of Sushi Zento. It has a door that is opaque and the restaurant seems mysterious. However, it is a different world on the inside.

Once we got in, it was a place filled with warmth, and the servers were friendly. Of course, it was filled with customers too, on a thursday afternoon, and more kept streaming in even though lunch hours was over at 2.30pm.

A small incident happened there, but let's take a look at the food first.

We had the Sashimi set that cost 46RM. I mean, look at the thick slices of juicy Sashimi. There is Salmon thick slices, Yellowtail, Tuna and Scallop. It is just nice for a couple as the sashimi slices came in pairs.

Everything is tasty, and the scallop was our favourite. It tasted fresh and sweet, almost like tasting ocean waves in your mouth and I am not exaggerating. 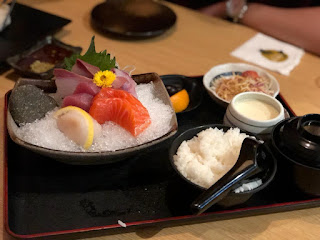 Being small eaters, we then order ala carte sushi to taste their other sashimi. We ordered our favourite  Salmon Mentai, Tako, Salmon Belly, and Scallop sushi. Prices were good, at around 3-5RM per piece.

The Tako sushi blew our minds too, as it was juicy, and gave a good omph into each chew. It gives a bouncy texture, and makes me hungry as I am typing this post. 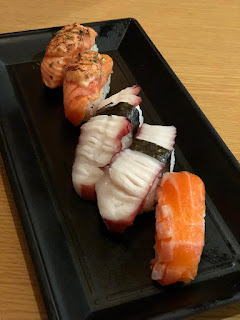 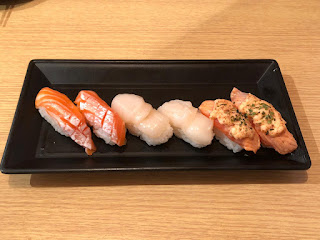 The Little Incident
We had asked for hot water refill around 2.15pm, when the staffs are busy clearing the shop for their afternoon break. However, we waited, paid for our bills and it did not come back.

Eventually, we asked for our tea, and the manager came out with a new pot of tea. She apologised and told us that they had threw the original pot of tea away by accident. So, they made a new pot for us.

We appreciated it, and made it a point to finish that pot of tea. Thank you!

Walking around Mount Austin
We played claw machines, 10RM followed by 10RM again, and caught nothing. Disappointed, we headed to the next destination.

Atlas Maison
This is my favourite cafe as it gives good wifi, good coffee and good food. We had a simple afternoon tea - A cup like snack for Mrs Llama, and a Croissant for me. We also shared a cup of latte which tastes awesome. Okay, more than awesome. 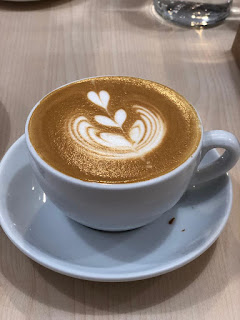 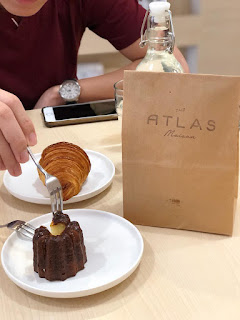 Headed to Toppen Mall - Newest mall in JB
Toppen Mall is strategically opposite Aeon Tebrau, beside JB Ikea.We felt it gives JB a new lease of life, and was very much furniture themed. We enjoyed the Aracde - Initial D driving game where I could compete Mrs Llama in driving.

It was a good mall for shopping and had good variety - Mr DIY, Toy shops, Supermarket, Karaoke boxes. They even had free Bouldering and Rock Climbing facilities. The rooftop had bars that reminded me of Vivo City, but a more peaceful and less crowded version.

We had a high tea there - Family Mart version. Oden was not too bad. Walked around and spent more money on claw machines found in Toppen Mall. For this whole trip, we spent 50RM on claw machines and caught nothing. We are giving up hope on claw machines. It just seem so difficult to catch anything nowadays. We played at KSL Claw Machines outside Popular, and at Mount Austin too. 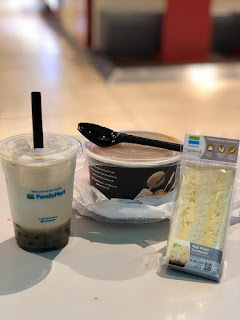 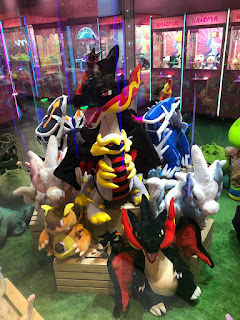 Dinner at Teppanyaki - Toppen Mall Food court
We could not eat much, so decided to settle for something not too heavy, and it was Teppanyaki. I had fried rice, and Mrs Llama had Seafood. It was extremely tasty, and affordable. Fried rice cost 12RM while Seafood set cost about 15RM.

I felt the Sets were more worth, as they came with Fried bean sprouts and Cabbage. After dinner, we went back to Airbnb and had deserts. 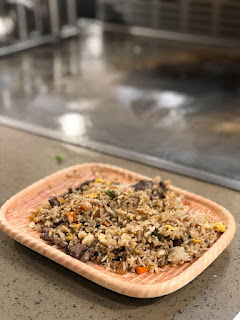 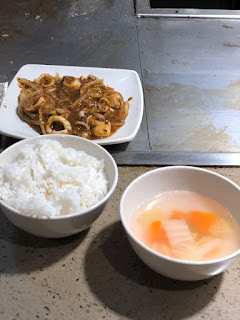 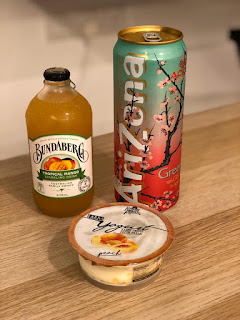 Day 3
We had breakfast at this cafe with a great ambience just minutes away from our Airbnb. We took a Grab there as it was raining. In the cafe, I enjoyed the smell of the coffee beans there, and it is in fact, coffee beans harvested from their own plantation.

Liberica Coffee
We went to the branch at Taman Molek. They have another branch in Malaysia. Find out more about the cafe here - https://johorkaki.blogspot.com/2013/11/my-liberica-specialty-coffee-at-taman.html.

I had the butter curry chicken, which tasted Muji style. Wasn't too salty, just plain curry fragrance. Croissant was actually more baguette-like. Not too bad.

Coffee - Latte Hot and Iced, was superb! It indeed lives up to its name. 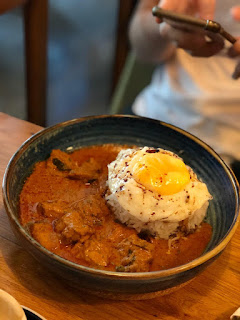 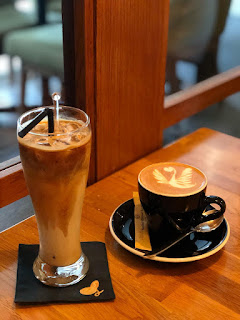 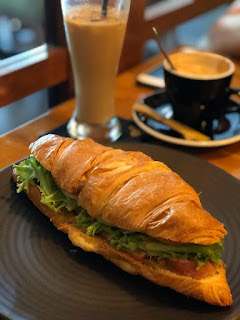 En-route to City Square + Soup at Souper Tang to counter the rainy weather
This is the saddest part of any trips. The time to head back home. We shopped around City Square and had soup. Mrs Llama ordered Porridge and I got Pig's Intestine Soup.
Last pic for the day: 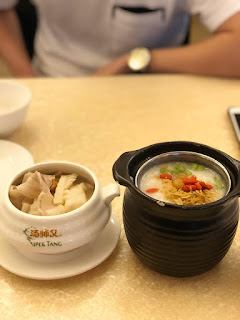 This pretty much sums up a JB trip of a young couple. And, we enjoy such a simple life. Looking forward to the next getaway. Meanwhile, eat, sleep, trade, repeat.